If you ask me my top films to watch at Halloween, 3 immediately pop out! An indie film called Murder Party that is a mix of Texas Chainsaw Massacre & Napoleon Dynamite. Ghostbusters, which needs to no explaining, and Tim Burton & Micheal Keaton's masterpiece Beetlejuice! If you don't believe me, check out this post I wrote LAST YEAR about my top favorite Halloween movies!

Who doesn't love this movie!?!? It has everything! Humor, Scares, Songs, Art, Football, Sandworms, Young Alac Baldwin! Plus, I'm not going to lie, this was the movie that had me develop a crush on Winona Ryder! Yes, most people consider this a "Halloween" film, but honestly, it's so awesome, it can be watched all year round, no problem. Laughter & horror can not be contained to just a single holiday!

I was stoked when Warner Bros Entertainment gave it the crystal clear update by releasing it on 4K ULTRA HD™ BLU-RAY™! I was even more excited when 94.5 KATS got the hooked up, so we can give our listeners the hook up! 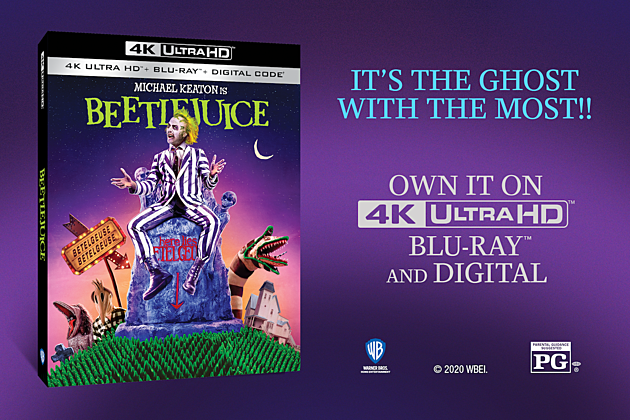 SAY HIS NAME THREE TIMES AND LET THE HYSTERICAL HORROR BEGIN! TIM BURTON’S BELOVED CLASSIC “BEETLEJUICE”, STARRING MICHAEL KEATON AS THE GHOST WITH THE MOST! OWN “BEETLEJUICE” ON 4K ULTRA HD™ BLU-RAY™ AND DIGITAL NOW!

Whether you already love this movie, ready to share "Banana Boat Song" with your family, or you plan to introduce a new generation to the world's leading bio-exorcist, Beetlejuice!, now you can! Your chance to win a digital download of Beetlejuice is just a spin away with Todd & Timmy's Wheel of Goodness! Take a spin & win every weekday morning in the 7am Hour! Listen LIVE or download the KATS App, make sure your notifications are on, because you never know when we'll do a secret contest!